Perceptions are everywhere, seemingly floating through the air. There is a constant pattern of thought going through people’s minds. What does he think about me? Do they really know my calibre? Why does my boss always speak negatively about me? Why do friends always think I am good for nothing? Why am I always branded as a serious person?

The constant bombardment of people’s perceptions of you can keep you bound in your mind. The key is to find a way out and to live in freedom from this bombardment. Perceptions are unspoken in many ways. People may praise you in public, but what they are thinking about you in their head is totally different.

The ability to see, hear or become aware of something through the senses.
The way in which something is regarded, understood, or interpreted.

How do people build perception?

1. They know too much about your life.
2. They have branded your personality based on the limitations of what they see, hear or become aware of through the senses.
3. Having regarded you but in a very limited way.

The truth of the matter is if we fall prey to people’s negative perceptions, we will never rise to our potential.

The key is to break out and reach a place in our hearts where these perceptions don’t dominate us any longer.

Jesus faced this in his hometown when he started preaching the Kingdom of God.
Luke 4:22 “And they said, Is not this Joseph’s son?”

This was not just a question, but the perception of an entire crowd that listened to Jesus preach is summed up in this question. Jesus preached a great sermon and demonstrated the works of God. Nevertheless, the people still regarded him in their minds as a carpenter’s son and not as the Messiah sent to redeem Israel. Hence, Jesus left that place saying “A prophet has no honour in his hometown.”

Wrong perception about somebody will always lead to dishonour. The key to breaking misperception is to sow honour with all your heart.

I’m reminded of an incident at my workplace a few years ago. A new member came aboard on our team and as he started to get trained on the job. We were already facing challenges. His English communication was very bad and his accent was very poor.

The team members started to build a perception about him and made fun of him while he was not around. This pressure got to him and he started to make many errors. Being the senior member in the team, I decided to encourage him and help him understand that he had potential and that a poor accent and communication would not be a problem. He regained confidence after a few chats and started to work hard at work and also on his written and oral communication skills. By the end of six months he had really done well and the team he worked for had an onsite opportunity. This person worked for a few more years at the company and did extremely well and later move to another firm in a higher post and started to flourish in every way.

We too can break the negative perception around us by declaring our identity in the Kingdom of God. Our identity is that we are children of God. Declaring your identity in the spirit breaks negative perceptions in the natural. Know who you are in the Lord and walk in that authority and confidence. What is floating in the air about you or in the minds of people does not control or define your destiny. Who you are in Christ Jesus defines you and your destiny. 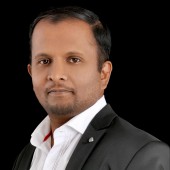 5 Reasons why we should not speak against a man of God.

Principles on Prayer from the Word of God.

Five areas the church can overcome to be more powerful.